A satirist who understands

"Conservative Momma" explains why this election was decided by the American people but is being arbitrated in court, very possibly the Supreme Court.

She gets it. And she's funny. The funny is subjective, of course, but this is how I know she gets it:
Last but not least: 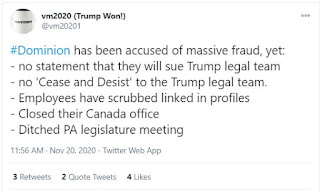 Posted by Patrick at 1:44 PM No comments:

I don't typically do double features, and of course movie theaters closed down in the wake of state edicts about groups of people gathering indoors in time of pandemic. But when the best person you know is recovering from a double mastectomy that followed six months of chemotherapy, and you get to love her through the whole ordeal --well, routines change, especially when she's trying to take her mind off stitches.

Saturday night in the living room, we enjoyed two different but surprisingly compatible movies: The Doctor (from 1991) and The Life Ahead (from earlier this year).

William Hurt and Mandy Patinkin were in the older movie, while Sophia Loren returned to the screen for the first time in many years for the more recent film (in Italian with English subtitles).

Both movies are worth watching -- or watching again, as the case may be.

In the world of episodic media, aka TV, we've enjoyed re-runs of Chip and Joanna Gaines' flagship program, Fixer Upper.

Posted by Patrick at 4:04 PM No comments:

Email ThisBlogThis!Share to TwitterShare to FacebookShare to Pinterest
Labels: media

Blueprint for the machine 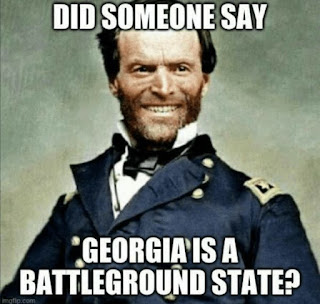 "The mechanism was simple: Flood the electorate with unsolicited ballots due to the “pandemic,” establish collection points from which they could be scooped up and monitored, sit back to watch the honest electorate stand socially distanced at the polls in the mistaken belief that Election Day actually meant something anymore...

[then] count into the wee hours, suddenly “suspend” the tallies while figuring out exactly how many votes would be needed to erase Trump’s lead over time, and then declare Biden the winner."

Walsh also has solid suggestions for more housecleaning at the Department of Justice and the CIA. I like that he's not afraid to say that Attorney General Bill Barr is "starting to make Jeff Sessions look good." And he's not enamored with the allegedly straight-shooting John Durham, either, because that so-called "straight shooter" (U.S. attorney for the District of Connecticut allegedly looking into the origins of the 'Crossfire Hurricane' coup attempt against Donald Trump) seems also to be a slow walker, figuratively speaking.

Indictments handed down several months ago would have been hard to ignore. Indictments handed down now will be buried as fast as the few stories about Hunter Biden's laptop were. Meanwhile, FBI Director Christopher Wray and CIA Director Gina Haspel, who were mentored by some very sketchy people, seem to have allegiance only to the administrative state of which they're both a disreputable part.

Funny, isn't it, how Donald Trump has had to face so much opposition from within government itself? The root of the problem there lies with the Obamas, who never had the good grace to leave Washington, D.C. after Barack's two presidential terms were over, and seem to have been running a kind of government-in-exile ever since. The lecturer-in-chief initially assumed that he was his own legacy, then realized that interest charged on everything he purchased with a race card would tarnish that legacy. Now he's got coastal property in Martha's Vineyard, minions in high places, and book writing to think about.

"No drama Obama" was always a façade, anyhow, else Barack would not also have bragged at a fundraiser with NBA players in 2012 that he was very rarely "the 5th- or 6th most interesting person" in any room, or gleefully reminded Republicans who questioned his penchant for executive orders that he had a pen, and he had a phone, and "elections have consequences."

Barack and Michelle have always yearned to be among Carol Baskin's "cool cats and kittens." That they felt that way even before Baskin became a minor celebrity can be deduced from Michelle's observation that her husband's political success marked the first time in her adult life that she was "really proud" of her country -- as though the rest of us had finally made good on a debt owed. I'll grant that the Obamas are too young for the Berlin Airlift to have made an impression on them, but it's telling that things like the warm popular reception for Purple Rain, the formal end to the Cold War, the stellar career of Oprah Winfrey, and the rise of the iPhone never registered as things to be proud of, either.

Now argument (as opposed to random commentary) is in short supply, but the Democrats seem bent on turning Joe Biden into the "Commander in Thief." When American citizens with roots in Venezuela take to Twitter to say that they've seen this movie before, and when the President of Mexico has to remind Fox News and other bastions of the mainstream media that our election isn't over yet, then you know you've been played by people in both major parties who really do consider you "deplorable." And the same people want you to forget that Al Gore litigated his election loss for 37 days, as Governor Kristi Noem helpfully reminded George Stephanopoulos.

Neither major U.S. political party has cornered the market on virtue, and neither one can, but those with eyes to see have noticed that the Donkey party since 2016 has become far more authoritarian than the Elephant party.

The always-acerbic Kurt Schlichter put it this way: "Reject the gaslighting. This election was not normal. It was not regular. It was not worthy of your blind deference. Is it some sort of coincidence that all the problems arose in big urban centers in swing states run exclusively by Democrats? ...Texas could do it right in one night. Florida could do it. The swing states? Not so much."

It comes down to words again 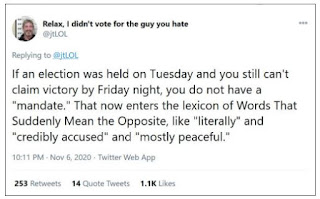 It almost always comes down to words, because words are windows into worldviews. Here's Andrew McCarthy's summary of the current goings-on:

Of course, it is not suppression to oppose the counting of votes that should not count because they are not lawful. Yet Democrats succeed in putting Republicans on the defensive because Republicans do not want to be smeared as vote suppressors . . . especially when, inevitably, Democrats and the media will intimate that any effort to enforce election law as written is suppression driven by racial animus."

McCarthy's right about that.

Thinking along similar lines, Daniel Greenfield is also worth reading, and for him the key word in this election was "racist," because Democrats tried hard to paint Republicans with that threadbare brush despite mountains of evidence to the contrary. (As one Internet wag put it, every blot on the American national character -- slavery, segregation, and abortion -- either is now or once was a part of the Democrat party platform).

Another example of a semantic struggle surfaced in Newsweek magazine, which described courageous Catholic priests as "hostile" to a Biden presidency.

One wonders what John Leo would say (although Maureen Mullarkey's tribute to him gives strong hints).

Posted by Patrick at 4:15 PM No comments:

Steve Hilton with a closing argument

Daniel Greenfield has also noted what happens when you pit love against hate, or MAGA against the 1619 Project.
Tyler O'Neil's election thinking is a lot like my own. And I agree with Neo, too.
With respect to COVID-19 (Wuhan coronavirus) specifically, Matt Margolis has done yeoman work cataloging progressive lies about the Trump administration's pandemic response.
Posted by Patrick at 3:46 PM No comments:

This is from the novel, A Star is Bored, by Byron Lane. The mother of a movie star (herself a star back in the day) has taken enough of a shine to her daughter's new personal assistant to warn him about her:

"Dear, I have some advice," Miss Gracie says, leaning forward only a few centimeters, but she may as well have come nose-to-nose with me; she's that engaging. "You're family now, so I can share this with you. You know the story about the man who wanted to fly, so he made wings out of wax, but he flew too high and the sun melted the wax and he fell back down to earth and landed flat on his ass in front of Jesus? It's in the Bible."

Posted by Patrick at 9:07 AM No comments:

Email ThisBlogThis!Share to TwitterShare to FacebookShare to Pinterest
Labels: books

Years ago, I thought his book Bobos in Paradise was amusing even if blinkered in the way it used white-collar workers in the Acela Corridor as templates for pronouncements about changes in American culture. Since then, however, Bobos author David Brooks has been on a long glide into self-parody.

Brooks is the guy who in 2005 was much taken with Barack Obama's "perfectly creased pants leg" after an interview. In a recent puff piece for The Atlantic titled "Bruce Springsteen and the Art of Aging Well," Brooks takes a gratuitous swipe at President Trump before strewing rhetorical flowers at Spingsteen's feet:

"President Donald Trump is a prime example of an unsuccessful older person," Brooks writes, "-- one who still lusts for external validation, who doesn't know who he is, who knows no peace."

Sheesh. That's amateur psychoanalysis at its most disposable, not to say hilarious. Donald Trump seems to know exactly who he is. More than that, he seems comfortable with  himself (as does his very different but complementary Vice President, by the way). Heck, Trump seems to appreciate people who are comfortable with themselves (not least among them Melania Trump), and you can't do that if you're insecure. How Brooks missed that when it's been on public display as long as it has, I'm not sure. Why he missed it is easier to explain -- the man has axes to grind, and they have nothing to do with Bruce Springsteen's latest album. Perhaps the "problem" is that Trump does not care to be validated by the same people that Brooks does. Cocktail party invitations don't mean as much to bar owners as to partygoers who are still looking for signs that their phone calls get returned.

"The Boss" may indeed have life lessons to teach us, but it's hard to stomach Brooks' sycophancy knowing that Bruce has said he'd be on "the next plane to Australia" if American election results don't meet with his approval. Whatsa matter, boss man? You've already got your mansion on a hill. Do ya still feel like you're a rider on a downbound train?