Neo looks at blind auditions for symphony orchestras, and uses that as a metaphor to think well about what might change for the worse if current notions of "equity" remove the blindfold from Lady Justice.

"Equality" isn't the only word that's been put through the wringer lately, however. "Moderate" used to be roughly synonymous with "impartial" or "fair-minded," but it's not  anymore.

Posted by Patrick at 8:25 PM No comments:

Email ThisBlogThis!Share to TwitterShare to FacebookShare to Pinterest
Labels: allies

Scott McKay understands what Rush did

Rush Limbaugh's death at age 70 from lung cancer was announced on his radio show yesterday morning by his wife, Kathryn.

Mark Steyn wrote what I think is the best of several very good obituaries for the talk radio pioneer, but Scott McKay does a fine job of putting Limbaugh's excellent work in context:

"He created an industry and fueled a movement that has won the modern American argument. Thanks in large measure to Rush Limbaugh, the Left doesn’t even bother trying to persuade anyone of their ideas; instead they invented cancel culture to stop the argument altogether.

They couldn’t cancel Rush, so they’re trying to cancel the rest of us.

We should honor him by continuing the fight. It will take all of us to paper over the void his passing leaves behind."

Posted by Patrick at 1:31 PM No comments:

David Warren with some of the stuff you never hear from people like Greta Thunberg and her shameless handlers:

"I am on record speculating that God put the polar bears here for a reason: to warn migrants off. And then he gave us Justin Trudeau, in case anyone hadn’t got the message yet.

But He also put extraordinary quantities of “fossil fuels” under the ground, in case we insisted."

Posted by Patrick at 3:05 PM No comments:

Email ThisBlogThis!Share to TwitterShare to FacebookShare to Pinterest
Labels: allies

Expertise should not be soulless

It's hard to blame the world's most famous virologist for being tone-deaf to the concerns of ordinary people when he hasn't seen actual patients since completing his internship more than 40 years ago. (Some context: That was before Woodstock, and before Neil Armstrong and Buzz Aldrin made the original moon landing).

I can't help but wonder, however, why Dr. Anthony Fauci is the highest-paid employee in the federal government, given his history of talking out of both sides of his mouth, bowing to Planned Parenthood, and greenlighting very questionable  investments such as gain-of-function mutation research done overseas (away from American-style quality control and potentially pesky oversight).

He's not ignorant (and not alone), but he's a political animal who pretends to neutrality, and defends his own credibility in sanctimonious fashion. He was against quarantines before he was for them.

Like all politicians, Dr. Fauci has grown fond of the limelight. Accordingly, he cuts himself the benefit of doubt but makes no allowances for anyone who questions the narrative of choice.

He's more enthusiastic about serving the current administration than he was about being an oracle for "Operation Warp Speed" in the previous administration, and (since his new boss has no objection) he didn't waste any time appearing on Rachel Maddow's cable TV show to do bad impressions of gospel hymns like "Free at Last."

On the few occasions when news producers don't lead broadcasts with COVID death numbers or 20-second clips of things Dr. Fauci says, they run footage from the World Health Organization instead, and that, please note, is not a step up.

What's next? That's what Neo asked. She could as well have pondered more colorfully, along the lines of "What fresh hell is this?"

Posted by Patrick at 8:12 PM No comments:

Just because this is awesome.

The version by Inbal Segev is great, too.
Posted by Patrick at 10:08 PM No comments:

Email ThisBlogThis!Share to TwitterShare to FacebookShare to Pinterest
Labels: music

The ghost of Christmas past? 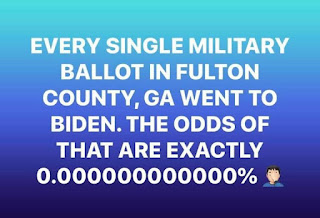 Writing for American Thinker, James S. Corum observes that Joe Biden (or his people) have applied analogy ineptly, not least because they don't remember the differences in World War Two events between the bombings of Dresden and Hamburg.

Biden and his handlers pulled the Nazi card reflexively, as progressives too often do.

They accused Republicans who questioned election irregularities of touting a big lie. The truth is very nearly a mirror image of what some progressives say it is, and when they don't pull the Hitler card, they just say shut up, as spokespeople for NY governor Andrew Cuomo have hoped in vain that Janice Dean would do. (Deplatforming is what happens to people who don't toe the progressive line, if they have a big enough audience to come to the attention of the nomenkatura).

Here's how Corum put it:

"The Big Lie of 2020 is that it was a clean and honest election. Like the Big Lie of Hamburg raids, the Big Lie will fail. Like Hamburg in 1943, there are simply too many witnesses. There are the videos of election observers being blocked in several cities and videos in Atlanta of observers sent away, and in their absence election workers piling ballots into the counting machines.  There is sworn testimony from hundreds of election workers detailing illegal actions. There are the Dominion machines in Michigan that were set up to create ballot errors which were “adjudicated” (flipped) in favor of Democrats. There is hard documentary evidence of the dead voting by mail, or of (supposedly) living voters receiving and returning their ballots by the postal service within a day. There are thousands of Georgia voters who illegally provided post office box numbers as their place of residence. There is the analysis of highly respected IT experts and statisticians who have spotted statistically implausible vote spikes, unusual local turnout, and voting patterns not seen in previous elections. The evidence presented at state legislative hearings (I watched some on One America News) is thorough, well-documented and plausible.

Joe Biden is beginning his presidency with one of the biggest lies in the history of American politics. On top of the “honest election” lie, he will have to maintain lies about his family’s Chinese and Ukrainian business connections, as well as his involvement in illegal deep state surveillance of political opponents."

James Bovard has written something similar. So has Conrad Black, not linked from this entry but well worth reading even when his essays appear in the otherwise deeply disappointing National Review, towering like sunflowers over the cat box where NeverTrumpers leave their odiferous deposits.

The thing is -- for example -- Antifa isn't actually "anti-fascist." They're just the most vocal of several groups carrying signs that mostly say "hooray for our side," as Buffalo Springfield put it generations ago. They're self-appointed hall monitors in the Temple of Wokism. And despite what Nancy Pelosi claims, the riot in Washington D.C. on January 6 wasn't even remotely an insurrection or an attempted coup.

Posted by Patrick at 2:24 PM No comments: 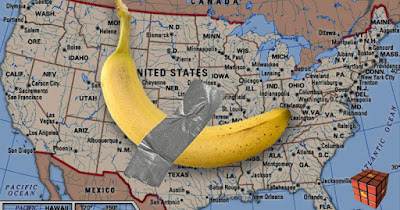 We know longer have cause to look down on the corruption of so-called "Banana Republics," because we've become one (I borrowed the image above from The People's Cube, where they're familiar with totalitarian impulses).

"The [U.S. Supreme] Court's stated reason for turning down the case brought by Texas against Pennsylvania and other swing states was its ruling that one state has no "judicially cognizable interest in the manner in which another state conducts its elections." That should go down in history as one of the dumbest things the court has ever said, right up there with 'separate but equal' as a justification for racial segregation or 'three generations of imbeciles is enough' as a justification for mandatory sterilization.

The question was not how Pennsylvania conducted "its" election, as the Court wrongly characterized the issue. The allegations went to the constitutional legitimacy of election procedures in a presidential election in which voters in both Texas and Pennsylvania participated. If one state may illegally manipulate votes in a presidential election, the influence of all the other states that do play by the rules is undermined. The Court was essentially saying that one team has no interest in whether the other team is cheating."

(To see and think about what the Supremes should have but chose not to, see this compendium of evidence for ballot fraud and irregularity as alleged by no less than 923 fact witnesses)