Tim Challies has been "Informing the Reformed" on an eponymous blog for years. I read some of his work, but because he is Calvinist and I am not, there are a handful of theological questions over which we differ. Ironically for the co-founder of a publishing company called Cruciform Press, although not for a man camped in Christianity's most iconoclastic wing, Challies has a problem with crucifixes, and what sounds like disdain for Christians who disagree with him.

In a blog post titled "Why You Should Not Wear a Crucifix," Challies airs Reformation objections to the traditional Catholic depiction of Jesus on the cross. Most of his argument comes from J.L. Packer, a higher-profile theologian in his own Calvinist tradition.

From a Catholic point of view, Challies and Packer start conversations about church history at a disadvantage. Although both of them are pastors, they've allied themselves with people who rejected apostolic authority in the sixteenth century. Were they to claim that their theology has apostolic roots, their own bibles would imply otherwise, because their translations pry seven canonical books out of the Old Testament. How and why that happened -- why Protestant bibles are smaller than Catholic ones -- is a post for another day.

Packer (and Challies after him) both assert that the wording of the second commandment plainly forbids making idols out of anything. In that, they are right: The true God commands that we do not worship false gods.

The commandment does not say, however, that creating a likeness of something is an affront to the original thing, or a violation of divine law. The portraits in art museums are typically tributes to their subjects, not insults of those subjects. And then there's the Shroud of Turin: So far as I know, nothing short of a miracle explains the imprint on that fabric that has led so many to venerate it as the burial cloth of Jesus. The shroud itself is obviously not Jesus, but it appears to bear the likeness of his crucified body, and scientists cannot explain how the cloth came to have the marks it does. If, as Calvinists assert, pictures and statues of Jesus come under the ban which the second commandment imposes, then the Shroud of Turin looks remarkably like an instance of God violating His own law, which makes no sense.

Another example, this one perhaps closer to home for our Calvinist friends: Remember the gospel accounts (in Matthew, Mark, and Luke) of people who try to trap Jesus into saying the wrong thing about whether Jews should pay taxes to the Romans? Jesus asks his questioners to produce a Roman coin. When they do, he says "Whose likeness is this, and whose inscription?" Everyone gathered around knows the answer, and the encounter famously ends with Jesus saying, "Then give to Caesar what is Caesar's, and to God what is God's."

Is that not an instance of God himself using a picture to make a point? Roman emperors presumed too much, but neither Jesus nor the experts in Mosaic law who were quizzing him stomped Roman coins into the dust as violations of the second commandment.

Aside from the way it uses the second commandment as a cudgel with which to pound medieval and Renaissance art, the other problem with the argument from the  "Reformed" tradition is a logical one: a commandment that forbids bending art into the service of false gods ought not be invoked with equal fervor to condemn art that serves the true God.

Back, then, to the crucifix. If we're going to appeal to authority while speculating about whether crucifixes help or hinder Christian piety, I'll take Thomas Aquinas over J.L. Packer any day, and it was Aquinas who said that he had learned more from the crucifix than from any book this side of the bible.

Violations of the God's law are not usually cited as great helps to faith by pre-eminent Christian theologians, and so we must suppose that Calvinists either found something in scripture that Aquinas (and Jerome, and John Henry Newman, and John Paul II, and countless other faithful scholars) missed, or that the Calvinist critique is weak sauce. 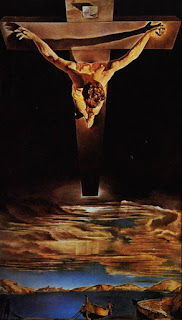 Challies quotes Packer to the effect that "images dishonour God, for they obscure his glory." More specifically, these Canadian Calvinists say, "the pathos of the crucifixion obscures the glory of Christ." I wonder whether they would also have taken issue with Saint Paul for saying "I preach Christ and Him crucified" (1 Corinthians 2:2). Paul, remember, had seen the risen Christ, and yet he seemed to think that preaching about Christ's redemptive sacrifice on the cross would do more to reveal the glory of God than to obscure it.

Paul was no wild-eyed outlier in embracing the paradox of the crucifixion, either. Anyone who claims that the crucifix "adulterates" the majesty of Jesus, or keeps the faithful from true knowledge of the risen savior, has probably never contemplated the mosaic in the apse of the Basilica of San Clemente, which dates back to A.D. 1200.

The focal point of that mosaic shows Christ on the cross, with the cross also the Tree of Life, from which a profusion of vines grows. Doves that represent the apostles perch on the beams of the cross around the figure of Jesus. The scene speaks of life rather than death, or more accurately, life through death. It's a catechism unto itself -- and it's not wrong.

Packer and Challies also assert -- as though it were a big deal -- that "images mislead us." Well, yes, they can do that. Sistine Chapel ceiling notwithstanding, we know that God the Father is not a muscular old man with snowy white hair. But Michelangelo's fresco nevertheless captures a tiny sliver of truth about the author and ground of all being. Look at the love for Adam in the Father's eyes, and the effortless power in His posture. These are truths that the skill of the artist helps reveal, especially in times and places where literacy is not widespread.

To say that images mislead is exactly like saying that analogies are imperfect. Writers do not for that reason forswear the use of analogy and metaphor. Instead, we learn the limitations of our tools, and use them to the best of our ability within those limitations.

Stained glass windows do not encompass or substitute for the beauty of pearly light and dappled clouds at sunset, but they do not detract from or "mislead" about that glory, either, because they point to and depend on it. So too with crucifixes and the amazing sacrifice that they commemorate, especially in an age that desperately needs reminding about why it makes sense to find strength in vulnerability, and how God himself did what no one else could, turning even a horrific instrument of torture into an unbreakable link between heaven and earth. 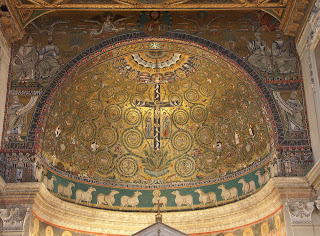 Email ThisBlogThis!Share to TwitterShare to FacebookShare to Pinterest
Labels: theology